Montréal, November 23rd 2011 – Yesterday, in a packed courtroom at the Ontario Court of
Justice in Toronto, the Crown counsel in charge of prosecuting the so-called “Main G20
Conspiracy Group” dropped all conspiracy charges against 17 organizers from Southern
Ontario and Québec.

One of the 17, Patrick Cadorette, an organizer from the Anti-capitalist Convergence of
Montréal (CLAC), had all his charges withdrawn by the Crown after almost 18 months spent
under restrictive conditions, including 11 months under house arrest.
This new development is a result of a plea agreement between Crown and Defense counsel.
Of the 17 charged with conspiracy, six pled guilty to “counseling” mischief, while the 11 others
have had all their charges dropped.

“The public has heard a lot about police brutality and mass arrests at the G20 summit,”
Cadorette says, “but the repression went a lot deeper than pictures of angry policemen beating
on demonstrators. We now know that there was a complex strategy aimed at criminalizing
political dissent and anti-capitalist organizing. This strategy included infiltration by undercover
cops, the surveillance of various movements, the intimidation and harassment of activists, and
hundreds of illegal searches and arbitrary detentions during the summit itself. The legal and
penal system also played a major role in this strategy to criminalize dissent. Through imposing
draconian bail conditions like strict non-association with targeted community organizations, long
term house arrest, and banning organizing or attending public demonstrations, legal authorities
clearly meant to weaken movements working for social and environmental justice and to
discourage people who identify with these movements from getting involved. Add to all this the
serious criminal charges targeting organizers, public defamation, and bail hearings held in the
climate of mass hysteria following the protests, as well as the staggering amounts requested
for cash bail, and you have all the elements of a perfect plan to demonize and criminalize
political activism.”

CLAC (Convergence of anti-capitalist struggles) invites members of the press to a briefing by Patrick Cadorette, the last CLAC organizer facing conspiracy charges related to the G20 protests in Toronto, and a member of the legal support committee.

Anti-capitalist demonstration against the G20, Canadian imperialism, and the Conservative government 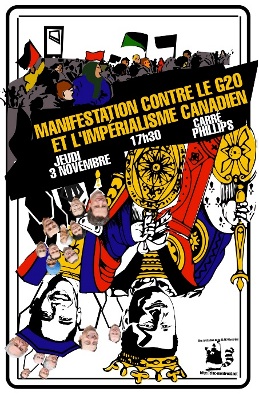 CLAC GENERAL ASSEMBLY
to organize for the November 3rd demonstration
against G20 in Cannes, Canadian imperialism an the Conservative party
TUESDAY, OCTOBER 11, at 6pm