Solidarity Protest with the Wet'suwet'en #AllOutForWedzinKwa 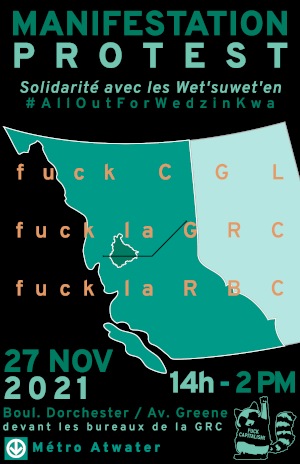 On November 27th, at 2PM, at the corner of Dorchester/Greene (Atwater metro), the Convergence des luttes anticapitalistes (CLAC) is calling for a demonstration in solidarity with the Wet'suwet'en people of British Columbia, who are fighting the canadian colonial state.

For years, the Wet'suwet'en people have been fighting the construction of a natural gas pipeline by Coastal Gas Link (CGL), a company owned by TransCanada Energy, known around here for its attempt to build the Energy East pipeline in the so-called Saguenay.

CGL is attempting to build a pipeline to transport shale gas from Alberta, which is obtained through hydraulic fracturing. This pipeline will cross the Yintah, the ancestral territory of the Wet'suwet'en people, a territory that was never ceded to the canadian colonial state. Despite an outright refusal by all Wet'suwet'en hereditary leaders, the RCMP moved into the territory in January 2019 to conduct raids that led to numerous violent arrests of land defenders to force the construction of the pipeline.

The current fight is over a portion of the Wedzin Kwa River. The Wedzin Kwa, which means "blue and green river" in the Witsuwitʼen language, has its water flowing from the glaciers of the Rocky Mountains, into other larger riversm before eventually reaching the Pacific Ocean. It is formed of pure water, rich in salmon spawning grounds, essential to the life of the region in general, and the Wet'suwet'en people in particular, who have inhabited it for millennia.

The Wedzin Kwa is currently under threat as CGL plans to run its pipeline under the river. Contrary to what one might think, in the event of a leak, the gas escaping from the pipeline would not simply rise to the surface of the water: some of the gas would be diluted in the water, which, even in small doses, could be a disaster for the fish and other life forms in the river. A minor leak under the river would be enough to permanently threaten the survival of the Wet'suwet'en people by wiping out the salmon population that has always run up the river.

As a result, several Wet'suwet'en clans have built checkpoints in the territory to block the passage of CGL vehicles. In 2020, these clans called on the Canadian population to react and block the economy in order to convince the government to order the removal of the RCMP from their territory. This call became known as #ShutdownCanada. As a result of this call, blockades have taken place across so-called Canada, initiated by indigenous and non-indigenous communities.

These same clans are calling for a new #ShutdownCanada2021, as CGL efforts resume, supported by the RCMP crackdown. The RCMP has dismantled several camps and checkpoints around the Wedzin Kwa in order to allow CGL to continue its work.

This is why we, as a collective of non-natives, have taken the initiative to organize a demonstration in solidarity with the Wet'suwet'en people. We must not forget that when we block ecocidal projects that pass near us, such as Energy East, they try to move further away, which often falls in indigenous territory. It is essential to continue the struggle when it moves outside our regions!

Of course, this fight against CGL is about preventing the worsening of the global climate crisis, which is unavoidable if natural gas extraction by fracking continues on a massive scale in Alberta. But this struggle is about recognizing the right of indigenous peoples to decide what can and cannot happen on their own land. There can be no reconciliation with indigenous peoples if the RCMP can enter their territories with impunity and if decisions made by the Canadian colonial state can be imposed by force!

Even 4500 kilometers away, we can put pressure on the CGL project. This project is financed by many banks, each one dirtier than the other, but especially by the Royal Bank of Canada (RBC), which is financing the colonial exploitation of the territory by the millions. Moreover, the completion of this project would be impossible without the close collaboration between the violent RCMP and the oil companies. These banks and police forces have numerous infrastructures throughout Canada... Let's show them our anger!

The land belongs to the people who live there, not to the dirty capitalists who impose their projects by force! Out with the RCMP and CGL! See you in the streets! 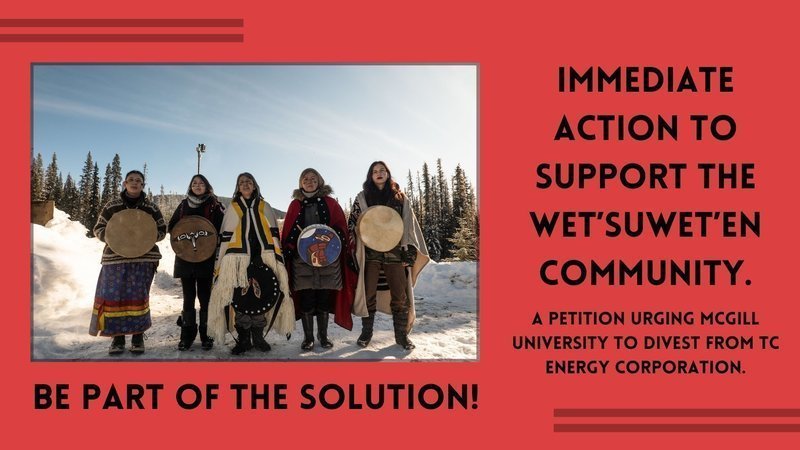 The Divest McGill collective, made up of students from McGill University, have launched a petition denouncing the university's investment in TC Energy, the parent company of Coastal GasLink (CGL). Whether you want to sign the petition or not, we believe it is important to know and spread the names of organizations that fund projects like CGL: https://www.change.org/p/mcgill-university-immediate-action-to-support-the-wet-suwet-en

This material was not made by the CLAC but we find it very nice (distributed with the author's authorization):

The following groups endorse the call of the demonstration (in alphabetical order):