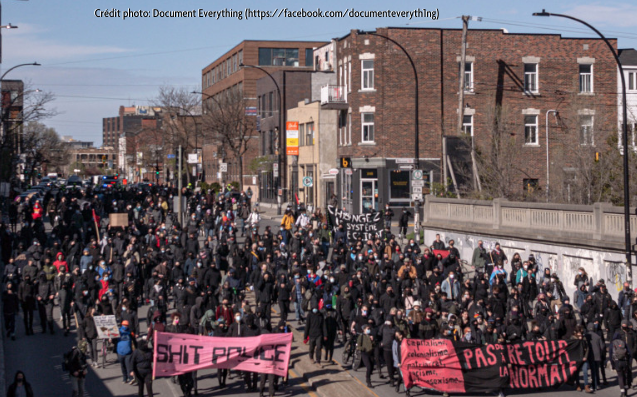 The Convergence des luttes anticapitalistes (CLAC) denounces the violent repression of its demonstration again this year. Indeed, the SPVM proceeded, as usual, to unjustified and brutal arrests. The police used truncheons and tear gas to silence the people who are tired of being exploited every day to enrich the nauseating bourgeoisie and their companies that profit from COVID-19. Several people were injured and the police even destroyed the cell phone of one participant.

More than 750 people gathered to denounce the exacerbation of social injustice and precariousness during the current pandemic. Capitalism and neo-liberalism have laid the foundations for this disaster and it is certainly not through this economic system that we will get out of the crisis. The organizers would like to thank the participants of the demonstration who took to the streets this year, despite the health crisis, with masks and distancing measures.

As part of the International Workers' Day, CLAC organized today the annual May Day anti-capitalist demonstration, which started at 4PM in Jarry Park. Last year, due to the health situation, there was no rally, but we did call for a day of visibility actions, which was a great success.

This year, we went to protest in the Mile-Ex to denounce the artificial intelligence companies that are shamelessly taking advantage of the crisis, converting public subsidies into tools for the private sector. The companies located there are a major force in the gentrification and displacement of the residents of Parc-Extension in addition of participating in the technological surveillance proliferation.

Stacy Langlois, a protester, said: "As always, it is the workers, the poor, the migrants, the people in predominantly female jobs, who are killing themselves - literally - to support the rich. We're the ones who cook and deliver their food so they don't have to go line up at the grocery store like the rest of us." She continues: "Their recovery plan is to keep us in misery."

In addition, the tightening of borders and the abuse of immigration authorities are on a mission to preserve these inequalities. Migrants who were "lucky" enough to come here are dying in our hospitals and warehouses. The streets of the poorest neighborhoods are empty, as the police are always looking for their next victims. The First Peoples are being humiliated, assaulted and killed by the governmental bodies driven by the extractivist companies. And in all this chaos, we are forced to obey, to remain silent, to be blind to everything that is happening around us. It is absurd and revolting!

In a fiery opening speech, Steven Lafortune-Sansregret cried out: "What we must revive is not the economy, but the struggles for the end of capitalist exploitation! "Together, ready to fight, we are much stronger and much more numerous than those who oppress us with impunity. Let's refuse this "uberized" future and build a world of mutual aid and equity. To achieve this, we will use all necessary means.

We don't want the world they are trying to sell us! No old normal, no new normal ! Let's abolish capitalism!