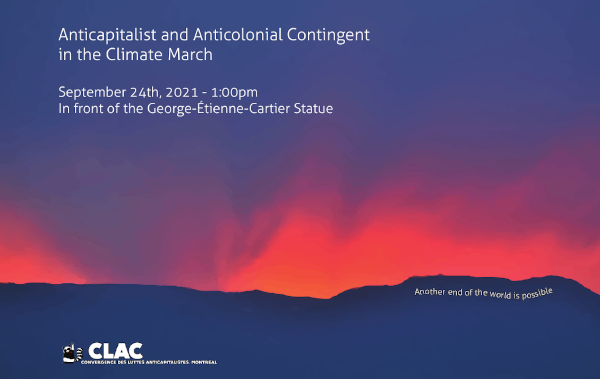 Another big protest for climate, what's the point?

Of course it'll be nice to have as many people as there was in 2019, but in the end, even Greta couldn't make our governments change their policies. Well, ok, it falls a few days after the federal election, and we can hope that it can put some pressure on the newly elected officials... But we know it won't: whoever is in power after the elections, nothing significant will be done, nothing significant has ever been done for climate in so-called Canada. Since the beginning of colonization, the State steals, exploits and destroys the land on which we live and which, ironically, ensure our survival. It is however important to note that many political parties have clearly played their card: these political parties will continue to invest in pipelines and other ecocidal projects, until death do us part. And these parties, who are happily walking toward our collective deaths, should obtain most, even almost all of our votes. In Québec, as the writing of this call, more than 80% of the votes are going to political parties with an horrific ecological policy history.

We can complain about the useless bickering going on at the parliament, but we can see that the problem goes beyond that. Most of the population does not want to change, and want to perpetuate their unsustainable lifestyle as long as possible.

And why should we blame them? Capitalism keeps selling this lifestyle, through shitty publicity pushing us to buy useless crap, through repetitive movies glorifying the rich and powerful, through a mercantilist education system which sells diplomas based on an expected salary... And the State follows suit, promising young families the possibility to buy a house. We are however very aware that the young generation will never be able to buy a house! And frankly, everyone getting a house would be a urban sprawl nightmare and a perpetuation of a toxic car culture...

But this is the lifestyle that the system hammers constantly into our daily lives, the so-called "american dream" they try to push down our throats. But this lifestyle sold by the Capital spells death for Earth, and therefore death for us all. And so, if the Capital wants to keep bugging us with this unsustainable lifestyle, well too bad, we will go without the Capital!

We'll see you in the anticapitalist contingent!

Friday, September 24th, 1PM, in front of the George-Étienne-Cartie statue