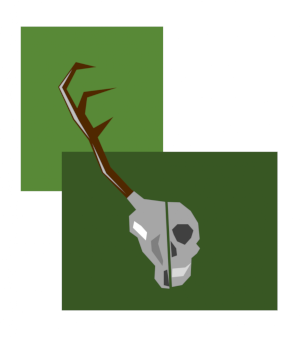 I remember the first time I killed a deer. I don’t know why, but before we started skinning or anything, I walked up to that deer and I put my hand on it. I could feel that the deer was still warm. In that moment I knew that he was the same as me. As I had taken his life, now I owed him mine.

Indigenous relations with the non-human world are very different from non-Indigenous in the Americas, so different that it’s difficult to begin discussing it in such a short article. As an example, the human being, as an idea, and therefore the idea of a non-human world and human non-human relations, are European concepts. In my language, Cree, the distinction between human and non-human does not exist. Thus someone such as myself, who has killed a deer, cannot say that they, and I, have not killed.

Before I go more into the Cree, Métis, western Indigenous connections with the natural world (again, I am struggling with the language here — there is no such concept as the natural world in Cree. We are natural and so is our world), I would like to discuss a little bit of my experience working for two seasons in Jasper National Park [1].

Admittedly, before I went to work in Jasper, I had thought of the mountains as a pristine wilderness preserved of the destruction which had been wrought upon the rest of the West in the process of capitalist colonization. Much of the province of Alberta is urban development, monocrop farmland, logging areas and, of course, oil extraction with some refining. The mountains inside the national park were saved of most of this industrial development and clear blue-green water still runs from their glaciers, which I drank, untreated, for the duration of my work.

Of course, while the land in the Park was spared the industrialization, across the rest of the province the land was not spared colonization and colonialism. Between 1907, the year of the creation of the Park, and 1913 the last of the Indigenous people to inhabit the mountains, those not already displaced onto reserves or elsewhere, were removed from their homes by force and booted from the Park. The small settler town of Jasper was established to house Park employees, businesses, and in practice, all who could afford to reside in the Park outside of the normal restriction, namely that a person must be working in the Park to be allowed to live there.

So of course while it was nice to share the company of the mountains, streams, animals and trees, in Jasper I was naturally lonesome to speak my language and see my people. But I quickly noticed something wrong in the environment outside of town, as well. It seems the mountains, too, were lonesome to see their people again.

In my adventures exploring, hiking, fishing and picking medicines (an Indigenous person is allowed to perform limited traditional activities in the Park in specific spaces, which I sometimes ignored), looking around at the plants, trees, animal tracks, etc. I very early on realized that as a bushman I would have a hard time living off of the land in these mountains. The trees are all the same, lodgepole pines, and the shade and uniform soil composition they produce make the forest floor identical across the landscape as well.

Despite the apparent lack of human interference in the growth of ecosystems in the Park over the past hundred years, the late stage, uniform ecosystems of the Rock Hills are not natural. They were and are, perhaps somewhat unintentionally, crafted by the Park in its attitude towards nature. While the Park protects its land from most industrial activities, the National Park is itself a commercial enterprise. The land in Jasper National Park is a commodity sold to tourism.

This commodification of the land is at the center of colonialism in Jasper and changes the ecosystems. In their desire to protect the land for tourist eyes and to sell the idea of a pristine wilderness, the creators of the Park, as well as enough of the people running the Park today, made sure that little has changed, and viewed Indigenous people and their practices as detrimental to nature. The Indians, in their ceremonies and livelihood, cut down the trees, hunted the animals, picked the plants, burned the dead wood and, perhaps most impactfully, burned the forest. It was in this line of thinking of preserving nature that Indigenous people were removed from the Park and fires were extinguished for the past hundred years. Of course, fires are an essential part of a healthy ecosystem, helping to renew and diversify, and it is primarily the removal of fire which has created the uniformity in the Rockies’ ecosystems. But what the Park still struggles to understand is that all of the activities of Native people are a part of the ecosystem. Since the glaciers first melted off of those mountains, we have been there practicing our traditional activities, making a good living off of and with the land. And to this day, as species such as the caribou make their way towards extinction from the mountains, the Park looks for any explanation, besides their way of life, for why these animals are disappearing.

The idea that humans are separate from nature, that we cannot interfere, and the commercial value in Canadian society that that idea possesses, is precisely what has destroyed the ecosystem health in Jasper National Park.

The fundamental building block of Cree and Métif society is kinship. ‘ᑲᐦᑭᔭᐤ ᑭᐋᐧᐦᑯᐦᑐᓇᐤ’ kahkiyaw k’wâhkohtonaw,’ meaning ‘we are all related’ is a common expression at the foundation of our relationships with each other and everything else in the world. This kinship can take many different forms, but fundamentally we view all things as living, and all living things as equal, and sometimes superior, to ourselves. When I hunt, I do not do it because I think I have some moral or intellectual superiority that makes it legitimate. I have no desire to kill an animal and I mourn and pay respects when I do. I hunt because I have to. And when I hunt in that way, I become bound to the animal which I have killed. As a species, my survival depends on theirs. I owe them a reciprocity both spiritually and physically for my own survival. I enter a relationship which is the same as the poplar who drinks the soil and the deer who eats the leaves and the wolf who eats the deer. And all eventually die, like myself, and give back to the earth.

Compared to the National Park’s no hunting and no cutting down trees rules, our world can appear brutal. But for 12 000 years it was us, hunting, fishing, trapping, praying, etc. who took care of those mountains. And the beautiful pristine wilderness they found and sold in 1907 was not a wilderness at all, but a land inhabited by, impacted by, and kâwâhkohtohk ayisiyiniwak itê kâwîkicik, in kinship with the people who lived there.

Since I live on this land and I’ve used the Mountain Peoples’ stories to illustrate my perspective, I should also mention that the Mountain People, of various nations and thousands of people, still love their land and work everyday to fulfill their dream of returning home.

My name is ᐅᑭᒫᐃᐧᓃᐸᐃᐧᐤ okimâw’nîpawiw and I am a Métis bushman from amiskwacîhk, Edmonton, Alberta

1- The Jasper National Park is in the Rocky Mountains of western Alberta, about 350 kilometers west of Edmonton.