Consume, recycle, and shut up 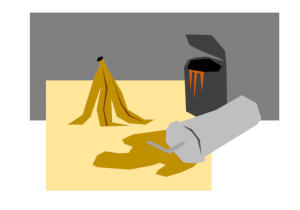 Compost trucks have now been running in most big cities in the West. Just like recycling and garbage, our urban trash is collected, week after week, propagating the shameless lie that it is the key to our survival on this planet.

How can we believe composting in Montreal will solve any problem if large multinational corporations continue mass production across the world? Is it surprising that recycling is inefficient when we know that the real problems are overproduction and overconsumption? Emma Goldman once said "If voting changed anything, they'd make it illegal". By extrapolating a bit, we can reach the same conclusion about individual solutions proposed to us such as recycling, composting and soon the right to repair. The conclusion is simple: none of these solutions will bring structural change to the fundamental problem: capitalism.

Therefore, and contrary to what many people say, recycling, composting, building cooperatives or communes should not be taken as solutions, but as experimentations of a post-capitalist society. At best, these are forms of struggles and sparks of the fight against capitalism. They remain a limited representation of the fight however, since there is always a danger of seeing individual emancipation as an end, and thus, this form of freedom remains limited for it would not be shared. By limited, we mean here that any freedom which doesn't imply freedom for all of us would be incomplete. An incomplete freedom only be made possible through domination of other people. A form of freedom that would suit capitalism after all.

This discourse for individual solutions is dangerous because it pushes for a disintegration of the collective struggle against the ongoing ecocide. This destruction of the collective for the profit of individual interests is hidden behind the neoliberal mask of a so-called collective freedom which could only be attained through the full liberty of the individual [1]. This regularly publicized lie only serves economic neoliberalism and destroys any possibility to find a real collective solution to the issues of capitalism, ecology being only one of them.

In his observation of American society and its political system, Alexis de Tocqueville [2], in 1835, observed that in democracy, no one is strong enough to fight alone and win. There is only the combination of our collective forces which can warrant liberty, as power will keep trying to isolate people in order to consolidate its grip on the State [3]. Therefore, on a macro level, all this individualization of social problems only serve, as mentioned precedently, the existing powerbase: the rich, the powerful, in summary, those who already benefit from the capitalist exploitation.

If we look specifically to the ecological challenge, in 2017, the Carbone Disclosure Project NGO estimates that 100 companies are responsible for 70 % of greenhouse gas (GHG) emissions, and that most of these came from the oil industry. Therefore, when Radio-Canada and others try to convince us to diminish our personal, individual ecological footprint, that we must do our part for the planet and that responsible consumption is the solution to all our issues, then we are clearly in the right to tell them to fuck off.

Take our car less? An utopian solution, insufficient within the capitalist system. Why? Because this is a despotic system which forces us through many tricks and traps, to overconsume through a personal isolation, and through sources of happiness we look for between two antidepressant pills.

Happiness, said someone, is only true when it is shared. By extrapolating again, we can affirm that this happiness is true only when it is shared with every one of us. Therefore, this happiness is unattainable under the shadow of capitalism. At best, we can hope for the hypocritical happiness of a small tomato harvest from a garden, at worst we will try to drown our sorrow by buying useless crap on Amazon, while trying to forget that it is the awful exploitation of the Earth that creates these mind-boggling Amazon profits.

If we had to climb out of our cocoon, we could therefore see that collective struggles are ongoing. Whether it is ZADs [4], anti-capitalist collectives of all types, or autonomous towns and groups hungry for social justice and for the rebuilding of an ecological cycle which would give us a life worth living.

In the end, are we not all, first and foremost, reliant on the Earth?

1- Individual liberty which finds its limit in the repression by the “invisible hand of the market”. For instance, if we do not have a lot of money, we cannot afford to eat organic food, since the market defined organic products are more expensive.

2- Alexis de Tocqueville was a French aristocrat and author. Following his trip to the United States of America, he wrote a book where he describe a democracy he considers much more stable than the one in France. However, he warns about certain ills from the American situation, especially toward political apathy and how people turn to individualism. The danger he sees is a transformation of State power into a dictatorship.

4- ZAD is a French tactic, which literally means zone to protect ("Zone à défendre"). This tactic consists in the permanent occupation of land we want to remove from capitalist development.