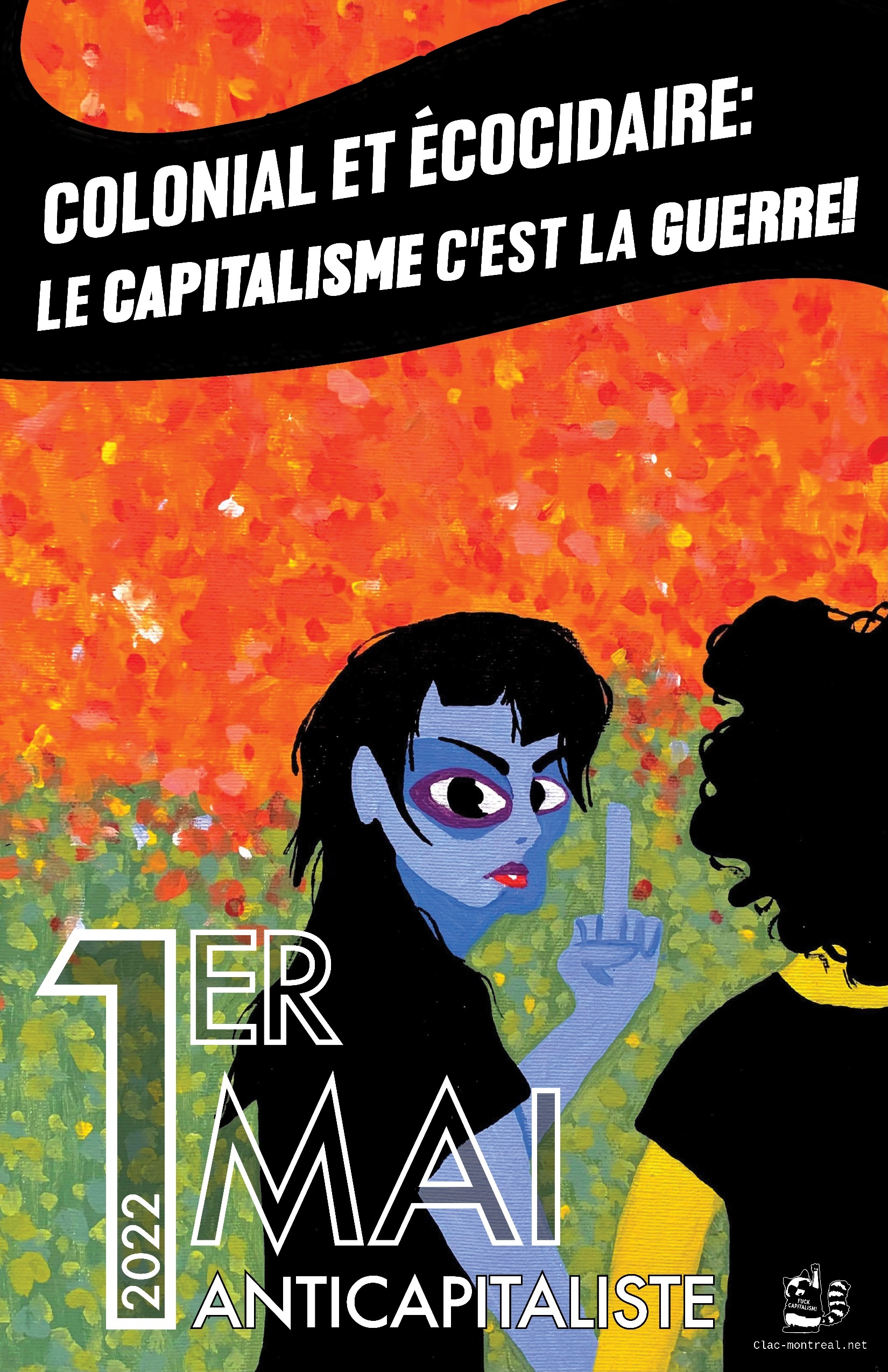 On May 1st, 2022, Convergence des luttes anticapitalistes (CLAC) is calling for a 15th Anti-Capitalist Workers' Day demonstration. This year, the colonial state has demonstrated once more that it will prioritize capital growth over our lives. In total hypocrisy, our governments speak the words reconciliation and environment while ignoring the sovereign rights of Indigenous peoples and destroying the land with extractivist and discriminatory policies. It is time to revolt!

As time passes, our steroid pumped capitalist system increasingly contributes to the degradation of the climate and ecological conditions that ensure our survival. We are heading for disaster as our governments collude with oil companies, the forestry industry and the mining industry to continue to push through ecocidal projects like the Coastal GasLink pipeline in Wet'suwet'en land, the Fairy Creek cuts and the latest announcements allowing the mining industry to emit even more zinc and nickel particles in so-called Quebec. To defend their right to bring the world to an end, they buy guns, cops and prisons, because they know that people are resisting, have always resisted and will continue to do so. Extractivism goes hand in hand with colonialism and the oppression of Indigenous peoples; both of these systems of oppression are central to the running of the capitalist system that keeps us in a misery that is constantly getting worse.

We have stopped relying on the hypocritical people in power for quite some time, but Trudeau and Legault are working hard to break records. Our governments continue to lash out at the unvaccinated in order to avoid blaming all the paternalistic governments of the last few decades for the unbearable working conditions in education and health care (disproportionately afffecting women). As usual, there is always a lack of money for schools and hospitals, but never for cops and prisons for migrants. On top of that, our governments wash their hands of the violence they inflict by attacking "wokes", saying that "Quebecers, we're not that bad." Among other things, Legault is puting forward transphobic, interphobic (PL-2), and xenophobic (PL-21) bils in addition to refusing to apply Joyce's Principle and to consider the housing crisis as such. As ecological catastrophe continues to plague the globe, our governments give us shit worlds of unsustainable electric cars that keep people in bondage and contribute to urban sprawl. They send an RCMP military squad to destroy an Indigenous camp so they can build another state and bank funded fucking pipeline ostie, and this at the very time the province is dealing with major flooding.

We have to face the fact that the situation is devastating; however, the world is starting to wake up and more and more people are standing together, standing in solidarity with other communities and building bridges that didn't exist before. There is more and more talk of environmental racism, for example of the illegal landfill in Kanehsatà:ke that endangers the health of people and land. Banners are appearing in occupied Palestine in solidarity with the defenders of the Wet'suwet'en territory. Our movements to abolish capitalism and all systems of oppression continue to grow in strength. We are on the right track.

We no longer have a choice but to refuse this work-based system of death whose primary interest is the enrichment of the bourgeoisie at the cost of our physical and mental health and the infinitely complex millennia-old ecosystems on which we depend.

On May 1st, let us express our rage against capitalism. Let's stand up against these oppressions, against the destruction, and build a radically different future. Let's take to the streets, together.

The IWW also organizes a demo on MayDay, at 12:30 at the Papineau metro station.